Here is a second excerpt of our new album “Jehanne”, “Foi En Ses Murs Jusqu’aux Rats”, to be released on april 29th. 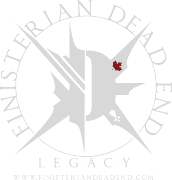